Colts Defeated By Hampshire In 1st Round Of The SEG League 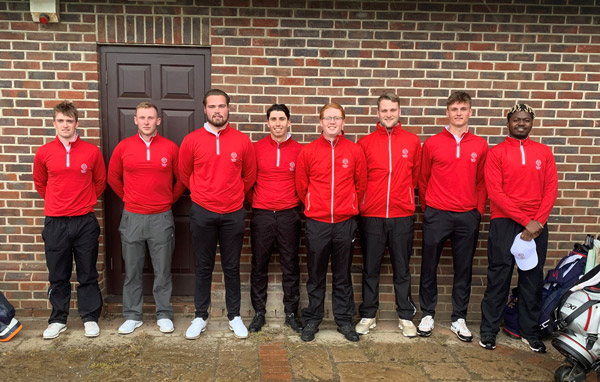 The first Colts’ match of the season would prove to be a difficult one. Extremely windy and rainy conditions against a strong Hampshire side is never a favorable mix.

There are no foursomes in this year’s fixtures, just straight singles match play.

Out first was leading the way was Sam Wood (Captain) and in true captains’ fashion, fired one down the middle of the fairway. Sam would later lose down the last hole in a well fought battle against Jamie Marwick which saw neither player get above 1up.

Gabriel Backers was out in match 2 against James Freeman. After a strong performance from James Freeman, there was a handshake on the 12th with a 7&6 loss for Surrey.

Out in match 3 was newcomer Archie Wells who certainly made his mark, winning his match 7&6.

Match 4 saw Will Deacon battling against the tough conditions but unfortunately lost 6&4.

Out in match 5 was in-form Cavan Mallon, who put up a great fight but ultimately lost 2&1.

Match 6 saw yet another newcomer, James Hollis, put in a strong performance to walk away with a 4&2 victory. A good day for the new lads.

Down to the final couple of matches which saw a great comeback by Darragh Monaghan to secure a half down the 18th.

The last match saw a reversal of the match before, Bryce Campbell battled strongly, but his opponent fought back to win down the 18th.

As Captain I would like to thank the Team Managers, Alan Page and Terry Casey for organizing the match and supporting us lads in what can only be described as hurricane conditions.

I would also like to thank Sutton Green Golf Club for hosting this match, the sandwiches and chips afterwards were lovely.

I was extremely proud of the fighting mentality that my team mates showed and would like to wish Hampshire all the best in their next fixture against Kent.