With the issues of COVID-19 around social distancing etc and that Golf Clubs have seen a massive spike in golf participation post lockdown, the County Championships this year was played in a reduced format and reduced number, although the quality of golf was far from being below standard.

Due to the delay for this year instead of the usual 72 players trying to qualify for the 16 knock out places played over the weekend the event had to be reduced to 45 players for 36 holes of qualifying on the Friday with the top 4 going forward to the Saturday with the semi-finals in the morning and final in the afternoon. Freeing up Sunday to allow our fantastic host club Woodcote Park to look after their club members too. Our thanks to them for allowing us access to their great course over the weekend.

Day one started in dreadful wet and windy conditions with holding on to the club an issue although by the conclusion of the morning rounds there was a slight improvement.

The scoring was understandably difficult with the 22 year old Wentworth golfer Harry Hobday Uzzell (Wentworth) leading the pack with the sole under par round of 71 (-1), closely followed by U18 Tommy Noel (Camberley) on 72 and First team stalwarts David Corben (Hindhead) & Harvey Byers (Walton Heath) each posting a 73.

Although the rain disappeared in the afternoon, the wind if anything got stronger making conditions as difficult as the morning if not worse, even so Harry added a 75 to be leading qualifier on 146.

He was followed up by three-time County Champion David Corben on 148, Terry Nicholls (Addington Palace) & Alex Tonge (Roehampton) on 150, making the hardest cut in the history of Surrey Golf.

The conditions on Saturday were slightly friendlier weather wise, but a strong breeze still prevailed.

Both Semi Finals were tight all morning with both matches, Alex v Harry and David v Terry coming to the final hole, Harry & Terry holding the narrowest of advantages.

Both Alex and Harry pulled their approaches to the par 5 closing hole and with Alex in a tricky spot behind a silver birch Harry was gutted to find his ball under a leaf seconds after the 3 minute limit and took the longest walk in golf back to play his 4th shot. Meanwhile the 2nd Semi between David & Terry had played up and we had the unusual situation of having both matches standing side by side in front of the green.

Harry had played a great shot to within 40 yards of the green whilst Alex still had to deal with the silver birch. Harry pitched to around 12 feet whilst Alex took 2 shots to get to a similar distance. Alex’s putt came up just short and Harry then holed to reach the final.

Terry found the fairway bunker around 120 yards short of the par 5 green after his 2nd whilst David was 40 yards short in 2 shots.

Terry played a great shot to around 30 feet just off the green whilst David pitched to 15 feet. A pitch to 6 feet from Terry and a close miss from David gave Terry the chance to close out the match which he duly did.

Terry v Harry would be the final.

Following a lovely lunch in the beautiful clubhouse at Woodcote Park the players were sent on their way by newly elected Surrey President Terry Casey who announced the players on the tee in front of a healthy gathering of spectators.

The first two holes were halved in par before Harry’s nice tee shot at the par 3 Third saw him hit the front.

Terry won the 4th with a regulation par with Harry missing the green, then Harry took the 5th with another regulation par after Terry got snookered behind the trees just off the right side of the fairway.

Terry then won the 6th, 7th, 8th, 9th & 10th with steady pars whilst Harry made minor but crucial errors to go 4 down.

Terry made a Seve up and down from behind 11 to halve but then 3 putted 12 whist Harry got down in 2 from over the green to reduce the deficit to 3.

The 13th, 14th & 15th holes were halved in pars before Harry took the 16th after a great pitch and a missed a five-footer from Terry.

Harry leaked his tee shot slightly on the 17th into the Semi whilst Terry split the fairway. Harry had found tree trouble and following a great approach from Terry and a pitch from Harry he conceded the match.

Many congratulations to Terry and commiserations to Harry, the final was played in a fantastic spirit as were both the semi-finals. Both Harry and Terry will no doubt be involved in many more Championships and big players in Surrey golf over the next few years.

As part of the Championship, any Club who have three players entered can also enter a team into the Club team Championship. The format for this is the 36-hole score for each player combining to give a team score, Burhill had six players so entered two teams. And it was Burhill A who took the honours with a 458 total. Duncan Hodgson 74 & 78 for 152, Harley Yates 79 & 76 for 155 and Thomas Hawke 75 & 76 for 151

Once again, our thanks to Woodcote Park for hosting the County Championship, presenting the course so well, especially the greens, and looking after everyone by keeping us all fed and watered over the two days.

Finally, a special mention to the members and Surrey volunteers who spent so much time on the course ball spotting and refereeing in appalling conditions. 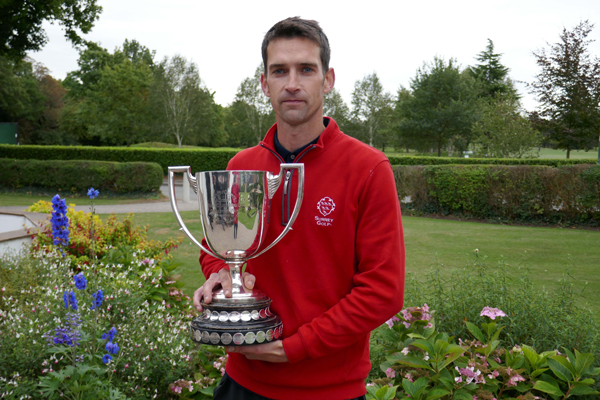